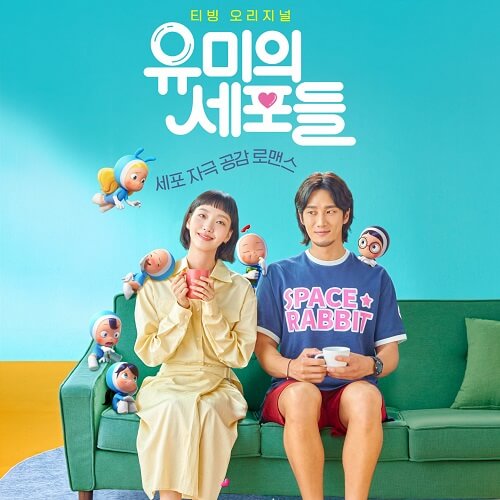 YUMI’s Cells (유미의 세포들 ) is a South Korean television series starring Kim Go Eun, Ahn Bo Hyun, Lee Yu Bi and Park Jin Young. Based on eponymous webtoon, it is a cell-based psychological romance that unravels the daily life of an ordinary office worker Yumi through the eyes of the cells in her head. It was premiered on tvN on September 17, 2021 and airs every Friday and Saturday at 22:50 KST.

Synopsis:
YuMi (Kim Go Eun) is an ordinary office worker. She is not good at expressing her feelings. Through her romantic relationship and work, she grows as a person and finds happiness in her daily life. YuMi has cells in her brain that represent different emotions like love, violence, rationality, good, and bad. These tiny cells in her brain work actively for her. They deal with her emotions and troubles.  Game developer Ku Woong (Ahn Bo Hyun), and her co-workers Ruby (Lee YuBi) and Seo Sae-i (Park Ji Hhyun), help in their own ways to revive her love cells.

We will update all the songs, lyrics, audio and music video from ‘YUMI’s Cells (Original Television Soundtrack) | 유미의 세포들 OST’ with English Translation as following table: