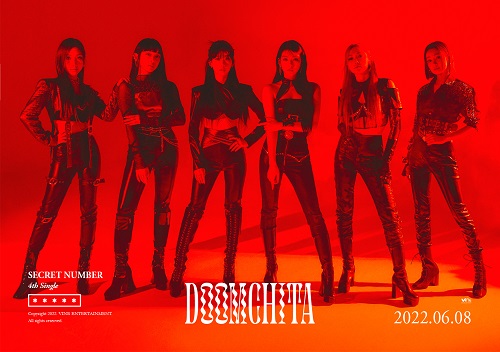 SECRET NUMBER (시크릿넘버) is an upcoming girl group from VINE Entertainment. The group consists of Léa, Soodam, Jinny, Dita and Denise. They will officially debut on May 19, 2020 with the single ‘Who Dis?‘.

2020:
– On May 19, the group officially debuted with their first single album “Who Dis?”. The album included, in addition to the title track of the same name, an additional titled “Holiday”.
– On October 21, it was confirmed that the group would be making their first comeback on November 4 with a new single. On this day, the group released their second single album “Got That Boom” and its title track of the same name.

2021:
– On January 8, the group’s fandom name was revealed to be “LOCKEY” which means “people who become KEYs that open the locked appeal of SECRET NUMBER”.
– On September 30, 2021, Vine Entertainment announced that Denise would not be participating in the group’s upcoming third album promotions due to contract negotiation matters.
– On October 8, 2021, Vine Entertainment announced that Secret Number would release their third single album “Fire Saturday” on October 27. On October 16, Zuu was introduced as a new member of Secret Number. A day later, Minji was introduced as the second new member.