You are here: Home / Artists / Hwasa 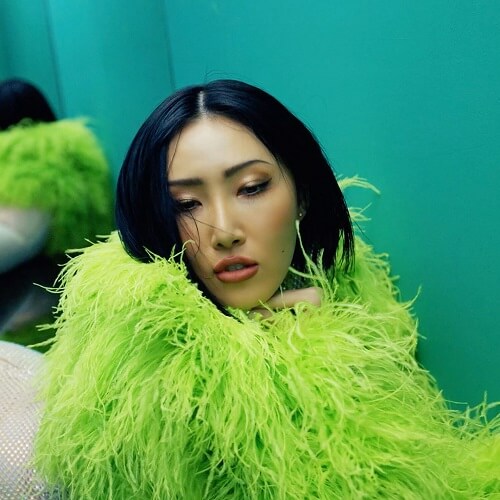 Hwasa (화사) is a South Korean singer and rapper under RBW. She is the maknae of the girl group MAMAMOO and a former member of project girl group Refund Sisters.
She made her solo debut on February 13, 2019 with the digital single “Twit”.

2014 – present: Debut with Mamamoo and solo projects
– Hwasa debuted as a member of the girl group Mamamoo on June 19, 2014 being one of the leading voices with the release of the lead single “Mr. Ambiguous” from their first mini album Hello.
– In February 2019, Hwasa made her debut as a solo artist with the digital single, “Twit,” which she participated in writing and composing.
– In March 2020, Hwasa collaborated with the English singer Dua Lipa for a remix of Lipa’s “Physical,” which features Korean lyrics.
– In April 2020, it was reported that Hwasa had joined the original soundtrack lineup of the Korean drama The King: Eternal Monarch and would be releasing her first solo soundtrack song, titled “Orbit.”
– On June 29, 2020, Hwasa released her debut EP, titled Maria, and the lead single of the same name.
– On October 10, 2020, she debuted with Refund Sisters, the project supergroup created through Hangout with Yoo. The group released their debut single, “Don’t Touch Me.”
– On November 24, 2021, Hwasa will release her single album Guilty Pleasure, and the lead single “I’m a 빛”