You are here: Home / Artists / KARD 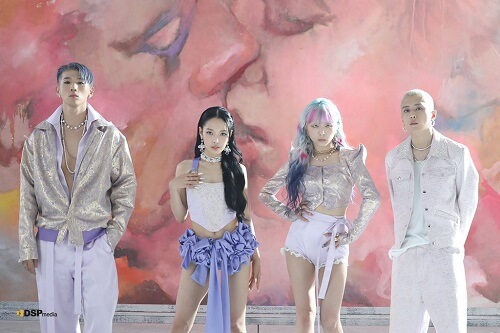 Pre-debut
Somin was previously a member of DSP Media’s Japan-based girl group Puretty, which disbanded two years after its debut in 2012.
J.Seph trained for five years, and BM trained for four and a half years under DSP Media.
The last member of the group was Jiwoo, who had trained under FNC Entertainment for two years and moved to DSP Media in 2016

2017-2019: Debut and touring
On July 19, 2017, they released their debut mini-album Hola Hola. The six-track album contained their previous project singles, as well as the title track “Hola Hola”.

2022: Return with Re:
– On January 21, 2022, BM released his first solo comeback with the single “Lost in Euphoria.”
– On May 28, DSP Media announced that KARD will release a new album in June and resume all activities, marking their first full group release in 22 months. Their fifth mini-album, Re:, was released on June 22 with the title track “Ring The Alarm”.