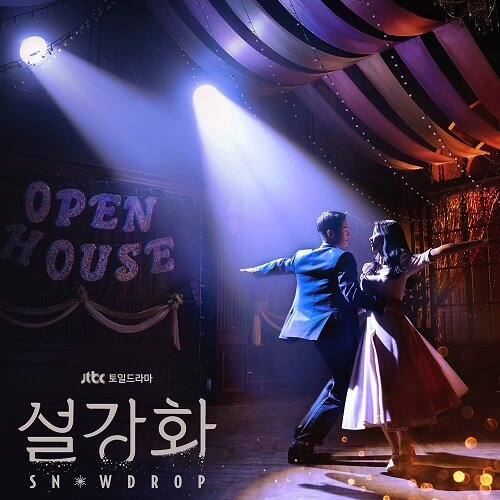 Snowdrop (설강화) is an upcoming South Korean television series starring Jung Haein, Jisoo (BLACKPINK), Yoo Inna, Jang Seung Jo, Yoon Se Ah, Kim Hye Yoon, and Jung Yoo Jin. It is scheduled to premiere on JTBC on December 18, 2021, and will be available for streaming in selected markets on Disney+ after the television broadcast.

Synopsis:
Set in 1987, when South Korea was governed by a dictatorial government.
Graduate student Im Soo-Ho (Jung Hae In) is covered in blood and he jumps into the female dormitory at Hosoo Women’s University. Eun Young-Ro Jisoo) finds him and helps to hide him. They develop a romantic relationship. Im Soo Ho is graduate student at a prestigious university. He is Korean-German. He has charisma and he is also mysterious.
Eun Young Ro is in the first grade of Hosoo Women’s University. She is a major in English literature. She first met Im Soo Ho on a blind date and fell in love with him at first sight.
Kye Boon Ok (Kim Hye Yoon) gave up entering university due to her poor family background. She now works as a telephone operator at a women’s dormitory. Pretending to be a university student, she attends a blind date with Eun Young-Ro. Kye Boon-Ok later gets involved in a case.
Lee Kang-Moo (Jang Seung Jo) is the leader of team 1 at NSP (National Security Planning). He is a man of principle, who doesn’t compromise in any situation. via asianwiki

We will update all the songs, lyrics, audio and music video from ‘Snowdrop Television Soundtrack | 설강화 OST‘ with English Translation as following table: