You are here: Home / Artists / ITZY 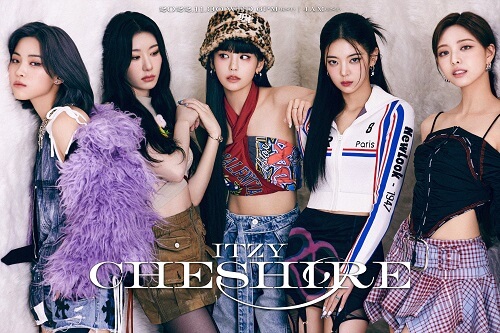 ITZY (있지) is a South Korean girl group formed by JYP Entertainment, consisting of members Yeji, Lia, Ryujin, Chaeryeong, and Yuna. The group debuted on February 12, 2019, with the digital single “IT’z Different”.
Itzy’s debut mini-album, titled It’z Icy was released on July 29, 2019 along with an accompanied music video for its lead single titled “Icy”.
On March 9, 2020, Itzy released their second mini-album, It’z Me, and its lead single “Wannabe”.
On July 30, 2020, ITZY announced that their upcoming music video and third mini album Not Shy, will be released on August 17, 2020.

2021:
– The group released their first English digital single album “Not Shy (English Ver.)” on January 22. The single contains English versions of every title track of their previous releases.
– On March 13 it was revealed that the group would release a special single as a gift for their fans with Korean and English versions. The single “Trust Me (MIDZY)” was released on March 20.
– On March 22, a teaser posted via the group’s social media announced they will make a comeback on April 30 with their fourth mini album called Guess Who. The album was released on April 30 at 12AM EDT (1PM KST).
– On the midnight of August 13, ITZY released a comeback poster for their first full album Crazy In Love, to be released on September 24.
– On September 1, ITZY announced that they would be making their Japanese debut with the mini album What’z ITZY.