You are here: Home / Artists / Kep1er 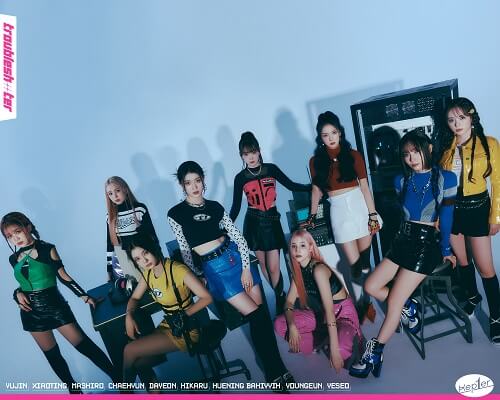 Kep1er (케플러; read as Kepler) is an upcoming 9-member girl group under WAKEONE. The group was formed through Mnet’s competition reality show Girls Planet 999. The group is managed by WAKEONE Entertainment and will promote for 2 years and 6 months. They will debut on December 14, 2021.

2022: Debut, Doublast, Troubleshooter
– On November 24, 2021, the group’s SNS posted teaser photos and announced that they will make their debut on December 14, 2021.
– On December 5, 2021, it was announced that the group’s debut will be postponed after a staff member tested positive to COVID-19. On December 8, it was announced through the group’s fan cafe that the album would be postponed to January 3, 2022.
– On January 3 the group announced their fandom name and colors.
– On June 20, 2022, Kep1er released their second mini-album Doublast, with “Up!” serving as the lead single.
– On August 3, 2022, Kep1er released their first Japanese single “Wing Wing”, which will serve as the lead single of their Japanese debut single album Fly-Up. The album was released on September 7, 2022.
– On September 23, 2022, Kep1er released the promotional single “Sugar Rush” through Universe Music.
– On September 26, a teaser poster revealed that Kep1er will be releasing their third mini album, Troubleshooter, on October 13.