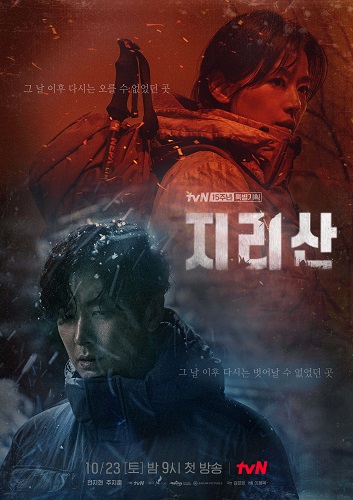 Jirisan (지리산 ) is a South Korean television series starring Jun Ji Hyun and Ju Ji Hoon. It premiered on tvN on October 23, 2021, and will air every Saturday and Sunday at 21:00 (KST) time slot previously occupied by “Hometown Cha-Cha-Cha“.

Synopsis:
Set against the backdrop of towering views of Mount Jiri, it depicts the story of rangers and other employees of the Jirisan National Park who climb through the mysterious and unexplored regions of the mountain, trying to rescue the survivors and lost trekkers. The drama is centered around a mystery surrounding the mountain’s many visitors; those who come to kill, and those who come to end their lives.

We will update all the songs, lyrics, audio and music video from ‘Jirisan Original Television Soundtrack | 지리산 OST‘ with English Translation as following table: