You are here: Home / Artists / TWICE 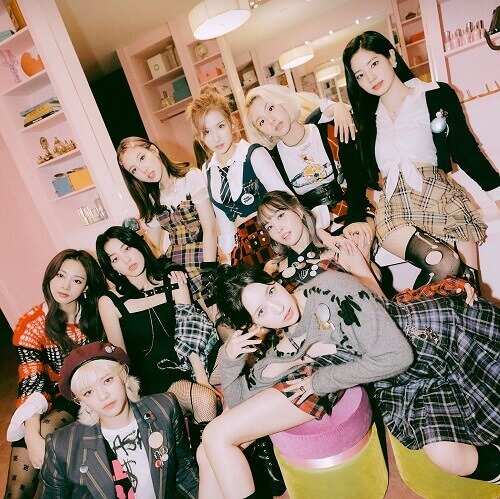 2015: Debut with The Story Begins
2016: Page Two, breakthrough and TWICEcoaster: Lane 1
2017: – First concert tour, TWICEcoaster: Lane 2, Signal and Japanese debut
– Twicetagram, “One More Time” and Merry & Happy
2018: Candy Pop, What is Love?, Wake Me Up, 2nd concert tour and I Want You Back
2019: – #TWICE2, TWICE Dome Tour 2019, Fancy You
– TWICE World Tour 2019 ‘TWICELIGHTS’, Breakthrough & Happy Happy, Feel Special, &TWICE
2020: Repackage of &TWICE, More & More, Fanfare, #TWICE3 and Eyes Wide Open
On July 8, TWICE released their sixth Japanese single, “Fanfare.” The b-side to the single will be a Japanese version of “More & More”.
On July 17, the group announced their third Japanese best album, #TWICE3, to be released on September 16.
On August 21, 2020, They will release English Version of More & More
On August 5, it was reported that TWICE would be making a comeback in October. JYPE responded the group is working on a new album and will announce details on the comeback schedule once they are confirmed. TWICE’s second full album to be released on October 26, would be titled “Eyes Wide Open”.

2021: “Kura Kura”, Taste of Love, Perfect World, “The Feels”
– The group released their eighth Japanese single “Kura Kura” on May 12.
– On May 19, the group announced their third Japanese studio album, Perfect World, which was released on July 28.
– The group released their first official English-language single, “The Feels“, on October 1. At the end of the single’s music video, which was also released on October 1, their third Korean studio album and fourth world tour were teased. The aforementioned album, Formula of Love: O+T=<3, is scheduled to be released on November 12.
– On December 15, the group will release their ninth Japanese single “Doughnut“.