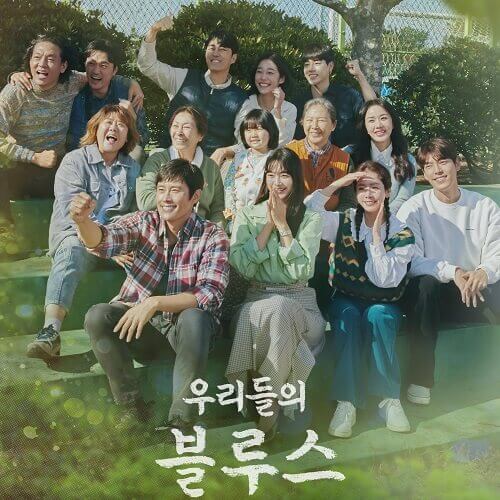 Our Blues (우리들의 블루스) is a South Korean television series starring Lee Byung Hun, Shin Min Ah, Cha Seung Won, Lee Jung Eun, Uhm Jung Hwa, Han Jimin, and Kim Woobin. The series revolves around the sweet and bitter life of people standing at the end, climax, or beginning of life, and depicts their stories in an omnibus format against the backdrop of Jeju Island. It is scheduled to premiere on tvN on April 9, 2022, and will air every Saturday and Sunday at 21:10 (KST) time slot previously occupied by “Twenty Five Twenty One.” It will also be available on Netflix in selected regions.

Synopsis:
“Our Blues” follows a group of people on Jeju island.
Lee Dong Seok (Lee Byung Hun) was born in a small village on Jeju Island. He now sells stuff from his truck on the island. He is not a sophisticated man. Lee Dong Seok then gets involved with Min Sun A (Shin Min Ah), who has just moved to Jeju. She has her own story which nobody knows.

Choi Han Soo (Cha Seung Won) was born and raised on Jeju Island, but he moved away to the mainland. He has now returned to his hometown. He is a perfect city man. He meets his first love Jung Eun- ee (Lee Jung Eun). She runs a fishing store on the island. She is friends with Go Mi Ran (Uhm Jung Hwa). Go Mi Ran has returned to her hometown in Jeju, because she got tired of the tough city life.

Lee Young Ok (Han Ji Min), who moved to Jeju Island, has been a haenyeo (female diver) for the past one year. She is a bright person, but many rumors follow her around. She meets Park Jung Joon (Kim Woo Bin), who is a ship captain. He is a man with a warm heart and he is looking for a woman who will not leave Jeju. He falls in love with Lee Young Ok. via asianwiki

We will update all the songs, lyrics, audio and music video from ‘Our Blues Television Soundtrack  | 우리들의 블루스 OST‘ with English Translation as following table: